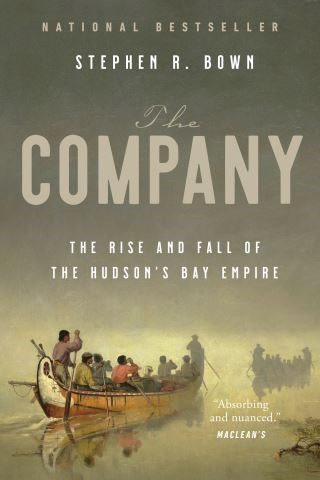 The Rise and Fall of the Hudson's Bay Empire

A thrilling new telling of the story of modern Canada's origins.

The story of the Hudson's Bay Company, dramatic and adventurous and complex, is the story of modern Canada's creation. And yet it hasn't been told in a book for over thirty years, and never in such depth and vivid detail as in Stephen R. Bown's exciting new telling.

The Company started out small in 1670, trading practical manufactured goods for furs with the Indigenous inhabitants of inland subarctic Canada. Controlled by a handful of English aristocrats, it expanded into a powerful political force that ruled the lives of many thousands of people--from the lowlands south and west of Hudson Bay, to the tundra, the great plains, the Rocky Mountains and the Pacific northwest. It transformed the culture and economy of many Indigenous groups and ended up as the most important political and economic force in northern and western North America.

When the Company was faced with competition from French traders in the 1780s, the result was a bloody corporate battle, the coming of Governor George Simpson--one of the greatest villains in Canadian history--and the Company assuming political control and ruthless dominance. By the time its monopoly was rescinded after two hundred years, the Hudson's Bay Company had reworked the entire northern North American world.

Stephen R. Bown has a scholar's profound knowledge and understanding of the Company's history, but wears his learning lightly in a narrative as compelling, and rich in well-drawn characters, as a page-turning novel.

Stephen Bown: STEPHEN R. BOWN has written ten books on the history of exploration, science, and ideas--including books on
the medical mystery of scurvy, the Treaty or Tordesillas, the lives of Captain George Vancouver and of Roald Amundsen and a doomed Russian sea voyage. His books have been published in multiple English-speaking territories, translated into nine languages and shortlisted for many awards. He has won the BC Book Prize, the Alberta Book Award, the William Mills Prize for Polar Books. His previous book, The Island of Blue Foxes, about Vitus Bering's voyage to Alaska, was shortlisted for the RBC Taylor Prize. Born in Ottawa, he now live near Banff in the Canadian Rockies.